We have provided a complete breakdown and implementation steps with the G.R.O.W. model. It is one of the most well-known models which has been tried and tested for years. Many other models created since, follow the same path while saying it in a different way or adding a few steps in between. If you are interested in any other models, we have listed many alternatives at the end of this resource for you to compare with so you can choose the best model that works for you and your team.

G.R.O.W. Model
Was developed in the 1980’s by Graham Alexander, Alan Fine, and Sir John Whitmore, first published in 1992. It was developed from the perspective of how someone would plan a journey. It is one of the simplest and most successful coaching models used for goal setting and problem solving. There are many variations of the G.R.O.W. model using different acronyms however, the specifics do not in t. The outcome is what matters in the GROW model. That is, to have clarity on the goal first. Understand and deal with the reality second. Explore options and be proactive about any potential obstacles in your way. Finally, to create a clear plan of action that is agreed upon to move forward with. Remember that if you tell them, they can argue with you. If they tell you, they own it.

The process while mapped out in four clear steps, may not be so linear in its implementation. It is predictable that you will need to jump from goal to reality, options to goal, options to reality and so on. It may take 5 minutes, or you may need to revisit the conversation again until the participant is clear on each sections outcome. Only then, will the clear way forward be theirs to own, theirs to action, and theirs to celebrate once accomplished. Consider that skipping or rushing any section to ‘save time’ by giving away answers or robbing them of the discovery will likely sabotage your very wish to have them reach their desired outcome. 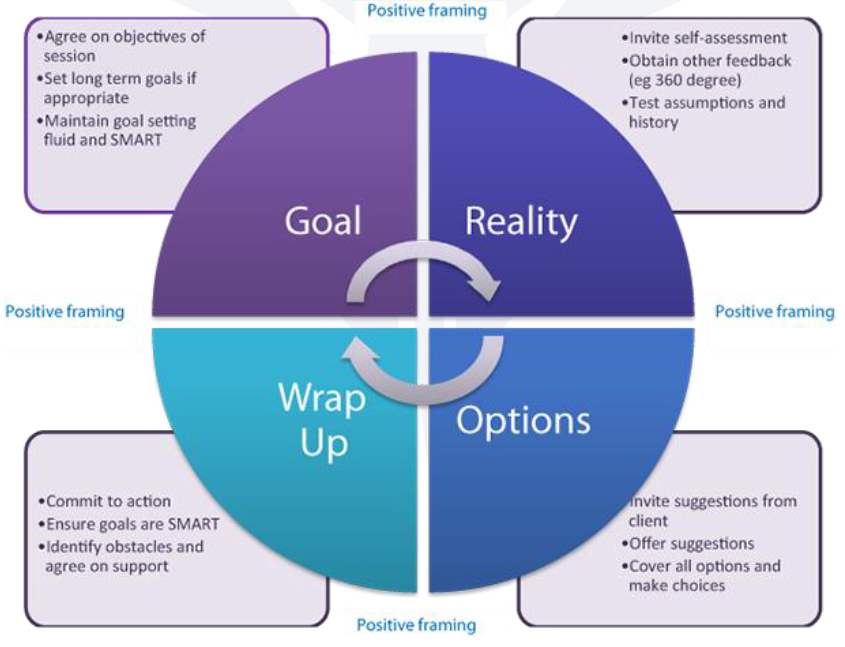 Implementing the G.R.O.W. Model
The important thing to remember is to achieve the outcome of each section.
Some sample questions to consider? GOAL(S) First you decide where you want to go REALITY 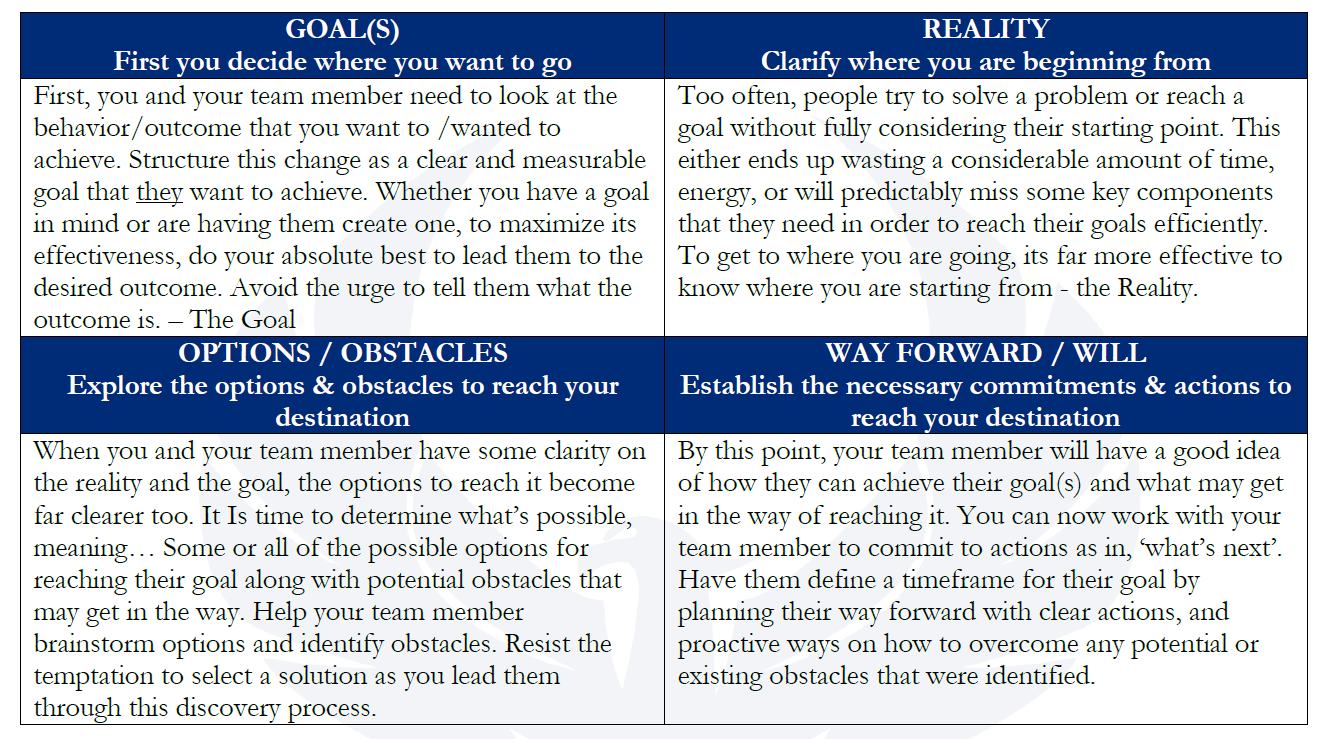 Some sample questions to consider? 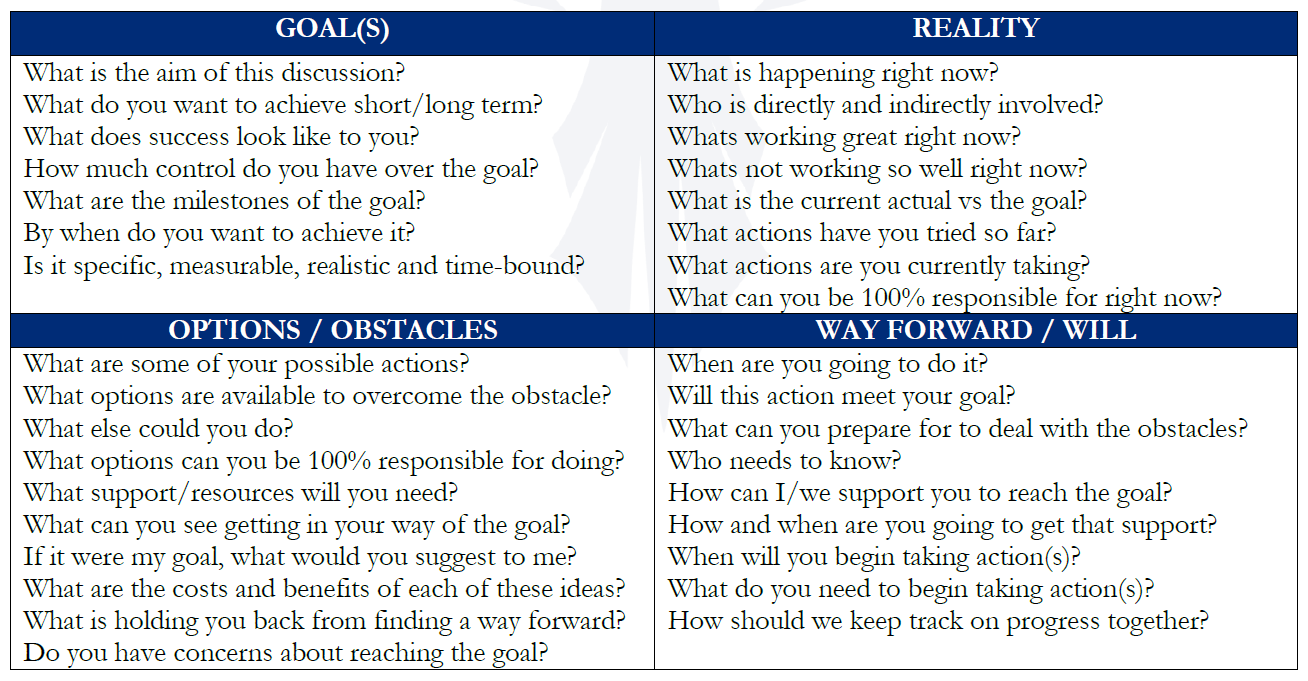 Implementation Activity
Whether you prefer to use the four quadrants as a template below, to have your participant draw it out for themselves, or to have a piece of paper to take notes on without the structure of the quadrant, please make sure to write any key points from each section down. This prevents misunderstandings, makes the conversation real, provides something you can go back to in order to avoid any confusion, and holds everyone involved in the process accountable with full transparency.
Use the sample questions provided and/or create a list of your own that you are more comfortable with for using for your GROW conversation.

Recommendation: Before applying this on someone in the workplace for a real goal, we recommend practicing in one of three ways, so you are not cold practicing it in your business and your team. Either: 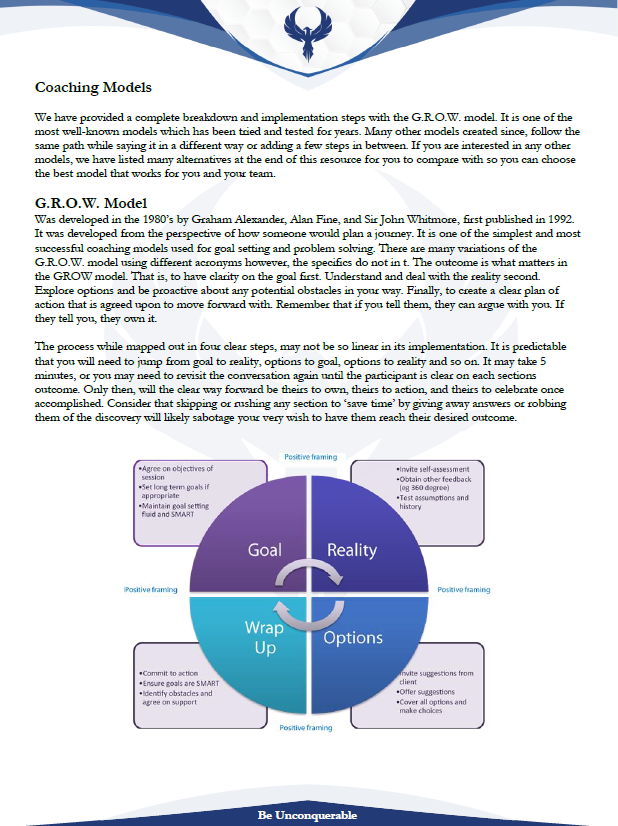